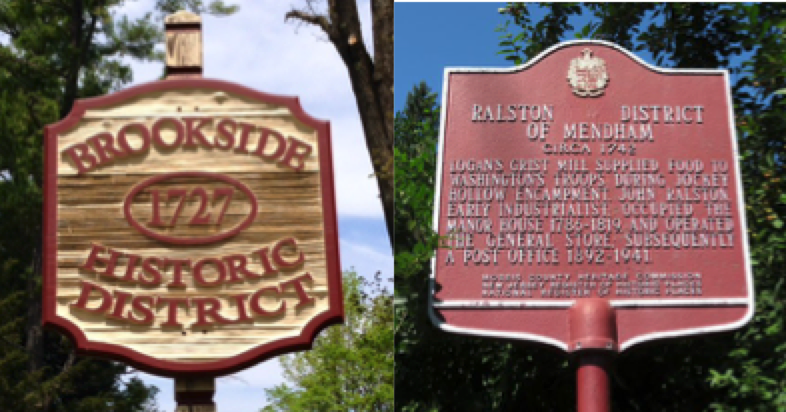 In Mendham Township streams tumble through hilly landscapes of historic homes and winding tree-lined roads. Try to imagine these hills and valleys as they existed 250 years ago. Listen to the buzz of sawmills, the bang of trip-hammers, the clang of anvils, and the hum of textile factories as they echo off the hills and resound through the valleys. These and similar industries were the foundation of Mendham Township’s colonial economy.

The first settlers were attracted to Mendham Township by the abundance of natural resources. Here they found water to power factories, trees for fuel, and rich deposits of ore. By 1748 the area housed iron forges, sawmills, and a gristmill along the North Branch of the Raritan River. This early settlement became known as Ralston, after the enterprising Ralston family.

Northeast of Ralston is India Brook, a tributary of the North Branch. In the woods beside this waterway are remains of iron mines, charcoal hearths, forges, kilns, a sawmill, and at least one distillery. The road that traversed this valley was abandoned long ago, leaving these sites relatively undisturbed.

On the eastern side of Mendham Township, brooks that formed the upper reaches of the Whippany River attracted settlers to the valley called Water Street or Waterville, later known as Brookside. Today Brookside is laced with tailraces, culverts, tunnels, and other conduits, which formed a complex water distribution system that powered gristmills, sawmills, and textile mills. Other industries along "The Street" included a tannery, shoe factory, glassworks, carpet mill, and iron works.

Deposits of iron ore, mica, and limestone also attracted many settlers. Limestone was quarried in Ralston for building material, or burned in one of fifteen kilns to produce lime for fertilizer and mortar.

Following the Civil War, Mendham Township’s industrial economy declined. Local industries found it difficult to compete with larger urban factories. The railroad, the great engine of 19th century economic prosperity, did not arrive in the Township until 1888. The Rockaway Valley Railroad (called "Rock-A-Bye-Baby" by those familiar with its unsteady ride) carried agricultural goods, coal, mail, and some passengers. The railroad’s presence never led to the development typical of the late 19th century suburbanization that so dramatically changed nearby communities such as Morristown and Madison. The railroad operated for only 25 years. The tracks were removed during World War I for salvage.

Though manufacturing declined in Mendham Township, many people still farmed. In fact, farming had been a major activity in the township since its settlement in the early 18th century. Names of prominent farming families are remembered to this day: Pitneys, Lorees, Ledells, and Guerins.

Despite the present-day transformation from a rural farming community to a residential suburb, Mendham Township retains its early character through its carefully preserved homes, farm buildings, and villages. These are living remnants of the township’s past. Here people worked where they lived in a natural setting, away from the "dark satanic mills" of the big city, pursuing economic independence - a portrait of Americana.

Mendham Township today has an area of 17.8 square miles in the south central portion of Morris County. It is part of the Greater New York- New Jersey metropolitan area, located approximately 35 miles west of New York City and 28 miles northwest of Newark. Philadelphia is approximately 80 miles to the southwest.

The current population according to the 2010 census is 5869. The median value of a single family home in Mendham Township is $470,000. Approximately 73% of the Township is "developed" and there are 76 miles of roads.